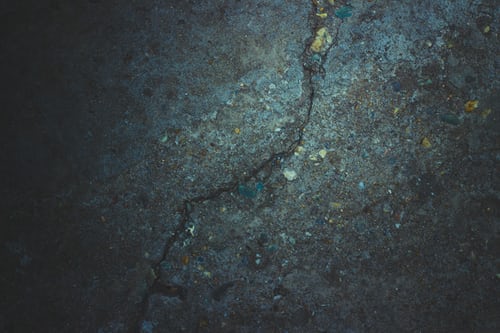 Cracks on the surface are a major defect in concrete structures. Early crack detection allows preventing possible damage. There are various approaches to solving this problem. It can be manual inspection or automatic detection methods. But nowadays automatic detection methods include not only laser testing and radiographic testing. Progress in neural networks and computer vision allows us to use image processing for concrete surface crack detection.

In this article, we will share our approach to solving the problem mentioned above.

We used a data set that consists of 198 high-resolution images in the JPG format and corresponding binary masks to train the neural network. Some images are photos of concrete structures only, other ones have a background and extrinsic objects.

Fig. 1 – Source image and its mask

Well, our first task is data preprocessing. At this stage, we need to create a training set for a neural network that consists of small images.

Firstly, we need to split each image into overlapping tiles 256X256 px. Those images have resolution 11664X8750 px and cracks are so small that after fragmentation we’ll get huge imbalanced data set. Each image divided into just about 1600 samples without cracks and 150 with ones.

However, we found an additional challenge. The most part of tiles with cracks has horizontal cracks. But cracks can be rotated at any angle. Therefore, our second step in data preprocessing is data augmentation.

Data augmentation is a technique to artificially create new training data from existing training data. We need to make the following transformations to get a great diversity of input data:

We used Python programming language and the following libraries:

Therefore, we used the neural network architecture U-net. In the original research, this architecture consists of three sections: the contraction, the bottleneck, and the expansion section. As a result of this, U-net can predict precise segmentation maps by combining the location information and context. In our implementation dropout layers were added because they force a neural network to learn more robust features that are useful in conjunction with many different random subsets of the other neurons. The loss function is Binary Crossentropy.

The metric to evaluate our U-net model is the Sørensen–Dice coefficient. After training, the value of this metric is 95% on the train set and 93% on the validation set.

We need to make image scaling before the prediction because U-net is sensitive to image scale. If there were no similar scale images in the training set, the neural network will be wrong in its predictions.

Therefore, in our implementation, U-net predicts 3 masks of each image: a mask of source image, a mask of 2 times enlarged image and a mask of  2 times reduced image. After that, we need to resize received predictions into source size and compute an average value of each pixel. Target mask of an input image is a binarized average image.

Figures 3-5 show an example of prediction for the input image (fig. 1). Fig. 5 – Contours of the predicted mask

Even though U-net architecture is intended to solve biomedical image segmentation problem, it may be used for other tasks. We got a precise solution to detect cracks on the concrete structures. Moreover, the neural network learned to find small cracks, cracks rotated at different angles and branched cracks. The major issues are recognition of spaces between blocks and its borders as cracks. One way to improve it is to solve it as an instant segmentation problem, i. e. to predict the class labels and find boundaries of the objects. Accordingly, we will know cracks localisation and its type.

Have you used similar technologies in your projects?